Stories (0)    Comments (10)    Favorites (47)    Statistics
Change sort: Sort by comment date
Comments by phidopige
Hurdle in a Steeplechase by coalitiongirl [PG] Likes: 5 Comments: 9
Summary: Trouble comes in threes for our heroes, and today is no different than other. Spike is permanently injured by a zompire attack. Buffy has a bun-sized problem of her own to worry about as well. Oh, yeah, and a familiar villain's on the loose and looking for revenge.
Categories: Episode Rewrite, Season 9 (Comic)
Characters: *Buffy, Dawn, Other, *Spike, Xander
Genres: Action/Adventure, Angst, Drama, POV
Warnings: Adult Language
Completed: No Chapters: 1 Table of Contents
Word count: 4,588 Hit Count: 825 ePub Downloads: 24
Published: May 23, 2012 Updated: May 23, 2012

FaLLen by Behind Blue Eyes [Adult Only] Likes: 142 Comments: 140
Summary: On the hunt for a killer and following the Bureau’s only lead, FBI Agent, Elizabeth “Buffy” Summers enters an extraordinary and unpredictable new world where her only guide is a mysterious and alluring stranger.

As she spirals further and further into the center of this world, she is torn between her two identities and the idea that this man, whom she surprisingly trusts, knows far more than he’s admitting.  How far will she go to catch the killer and ultimately, is it worth risking her very soul?

*This is a Supernatural Thriller*

I'm amazed after all this time someone is still interested in this story.  I'm really taken back.  I'm sorry to have let this story go to the wayside.  Unfortuantely, with how my RL has been for the past 6+ months, let's just say, has not be conducive to writing.  Just lately my life has been settling down and I'm feeling that ol'writing bug buzzing around in my head.  I want to thank you for still wanting to see this story finished.  I can't tell you how much this means to me.

Have you given up on this one?
I really miss this story

Hi, phidopige.  Sorry it took so long to respond.  Honestly, I haven't necessarily "given up" on this story, but truth be told, RL hasn't been exactly kind nor conducive to writing.  Hopefully soon, I will be given a break and I will finish this story.  Thank you again for being so supportive, even after all this time.

Did I mention I love this story?

I love this story!

Thanks so much for keeping a torch for this story.  Maybe one day... 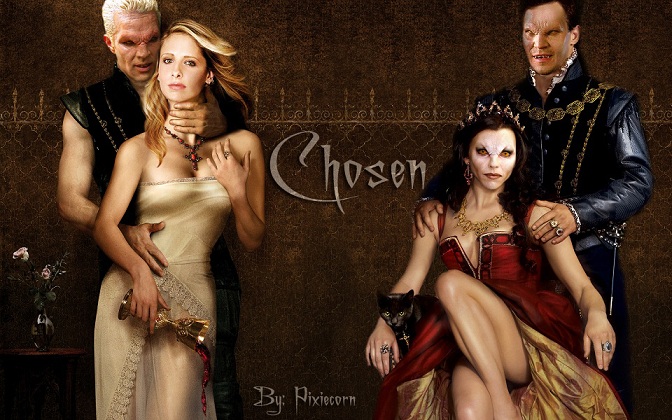 Sorry about your dog

Summary: While under her Will Be Done spell, Willow just happened to say “I don’t care about anything,” and as a result, wanders blithely off as a vengeance demon. Spike and Buffy are left to protect a threatened Xander and a blind Giles while under the effect of a powerful love charm. But all is not happy in paradise – they’re still constantly fighting, and Angel is determined to end the spell they’re under. In a desperate attempt to collect the tattered remains of all their lives, ex-watcher Wesley Windham-Pryce is called in to try and play marriage counselor between the vampire and the slayer. Not entirely as crack fic or as fluffy as the premise would suggest, though it starts funny.

I absolutely love this story.

That was so horribly beautiful.

Summary: “Without a question—she’s the one.  I knew it the minute I lay eyes on her that my search is over.  I long to slip inside her, to feel her surround me and take me places I’ve never been.  The time is now.  My wait is over."

Through the years: Spike and His Best Girl.

phidopige commented on Chapter 1: Chapter One: At First Sight on November 04, 2015

Have you given up on fallen?

Hey, phidopige!  No, I haven't.  After almost a year on hiatus and unfortunately, the computer that housed on my Fallen stuff, is pretty much dead, I've sorely neglected this fic.  Recently, I tried to retrieve the info, but it hasn't been easy.  My plan is to tackle and finish this up after I finish up the current three WIPs I'm working on.  I'm so, so sorry to keep you in limbo and waiting.  I so appreciate that you are still holding out for this story.  Believe me, my plan is not to leave this unfinished, though its been a long while since I've even touched it.

Summary: The only thing certain in life is change. Will Pratt is trying to play nice with Dru, post-divorce, for the sake of the kids...as well as in the hopes of reconciling. Buffy Summers just wants to get her sister married without losing her sanity. Two weddings, one bar, a series of chance meetings and our favorite couple find themselves in a romantic tug of war, pushing and pulling each other towards their "new normal".
This all human fic is the second one I've written for a challenge by Angelic Amy for the 2017 Artistic Anniversary Challenge. The idea is that Spike and Buffy meet by chance and have terrific chemistry, but when Spike discovers their substantial age difference he backs off. Buffy, however, is determined to get her man.
Huge thanks to Angelic Amy for the inspiration, teragramm for being an awesome and encouraging alpha reader and making the beautiful banner, and Badwolfjedi for being my cheerleader and beta reader.
Categories: Challenge Response, All Human
Characters: Andrew Wells, Anya, *Buffy, Dawn, Drusilla, Ethan Rayne, Giles, Jonathan Levinson, Joyce, Original Characters, Other, *Spike, Tara, Xander
Genres: Angst, Drama, Dramedy, Romance
Warnings: Adult Language, Human!Spike, Sexual Situations
Completed: Yes Chapters: 45 Table of Contents
Word count: 357,272 Hit Count: 48,188 ePub Downloads: 582
Published: January 15, 2019 Updated: October 04, 2019

This is a really cute story. The way you write the characters' inner monologues and all their self doubt makes it feel very real and relatable.

And now you've made me worry about Buffy. Why is she on medication? Is she okay?

I'm really touched that you have come to care for the characters so much. That's wonderful! More will be revealed about Buffy's situation, and everyone I hope. I really do like to figure out how the characters tick, so we learn quite a bit more about everyone, it's a kind of slow reveal, and I hope you will enjoy it as much as I did as I wrote them. I'm glad they seem real, that is what I aim for when I write. I want the characters to seem as real to the readers as they do to me, and relatable. After all, we're all in this life together!

thank you for taking the time to read and comment!

Summary: “World is what it is. We fight and we die. Wishing doesn't change that. You can believe in a better world. I have to live in this one.”
Anyanka’s wish was broken, but the world it created continues. Now Buffy must join forces with rebel vampires to create a world they can all stand to live in. But can Spike, Drusilla and Angel actually work with a hardened slayer, who would just as soon see them all dust?
Complete at 38 chapters
Categories: Wishverse, Alternate Reality
Characters: Angel, Anya, *Buffy, Drusilla, Giles, Larry Blaisdell, Oz, Principal Snyder, Quentin Travers, *Spike, Wesley, Willow, Xander
Genres: Action/Adventure, Fighting, Romance
Warnings: Blood Play, Cheating/Infidelity, Substance Use/Addiction, Dubious Consent, Rape (Implied), Sexual Situations, Spike/Other (Temp)
Challenges: The Wish
Completed: Yes Chapters: 38 Table of Contents
Word count: 191,638 Hit Count: 45,835 ePub Downloads: 539
Published: April 01, 2020 Updated: December 09, 2020

Snap indeed! We still have two more chapters to go, so don't give up yet.